One might be the loneliest number and it was a given to happen… just surprised it was so soon. 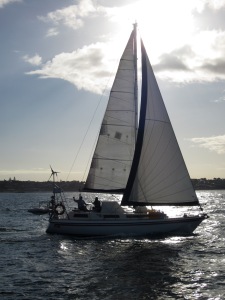 Immediately concluding my previous post, my crew Greg announced he wasn’t continuing the voyage with me to Albany. This was sad to hear though not surprising given Greg’s recent severe sea sickness.

Most days when the wave motion was moderate he would find a piece of the deck to lay down on to try and settle his stomach. He lost his lunch at least once every day. Yesterday I planned to take a long tack out to sea and then tack back to arrive at the Bunbury harbor in daylight. One look at poor Greg though told me he would not be able to manage it.

Thanks anyway mate, I appreciate the effort.

Right now I’m tucked up in a snug little corner of the Bunbury harbor as the (20 – 25 knot) wind whistles overhead and the low passes.

This was expected, predicted and the reason for choosing to spend a couple of days here before moving on. Greg’s 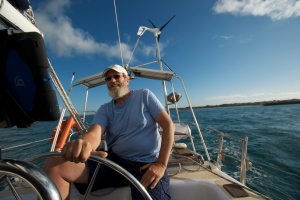 departure hasn’t materially changed anything except that the next and most challenging part of the voyage is mine to sail alone.

So, with good preparation and careful timing I’m hoping to give myself the best chance of success.

Thank you everyone for your support and comments, its great to know you are along for the ride!

2 Responses to Back to solo