Not exactly Paris, but coming into Bunbury Harbour had its own kind of excitement.

Awoke at Dawesville to a magnificent sunrise over the Marina. The water was glassy smooth and even the seagulls seemed to have nothing to fight about and were just sitting quietly soaking up the ambience as well. Our departure, despite the early morning rise was delayed while we filled our gas bottle and topped off the diesel tank. Nice surprise there as by calculation we are only using around 3 lt of fuel per running hour pushing FreeSpirit along at 5 knots. Very economical.

Left the cut at 0928 and out into the Indian Ocean where we found light South Easterlies to cruise along the coast with. This wasn’t a long term plan however as even moderate swell activity can lead to breaking waves in 5 metres or less of water, even a long way from shore. Approaching one such bommie we tacked and headed for the open ocean. 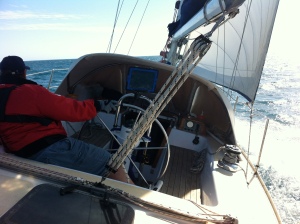 As the day progressed the winds swung further and further toward the South, our destination direction. Nothing for it but to tack out to sea to make some distance from the shore as night fell. Just before sunset we had our best sail of the day with winds to 14 knots against a moderate swell and clear skies. All too soon though this died to almost nothing and as the last of the daylight disappeared over the horizon we turned South and engaged the diesel for what was a long motorsail to Bunbury.

After proclaiming that this was the first day he hadn’t thrown up over the side, Greg started to once more turn a greenish shade and proceeded to once more see the Lasagne that he had prepared for us just 1/2 hour ago. Poor guy, despite his enthusiasm and sense of fun and adventure his stomach is giving him a hard time of it once FreeSpirit starts rockin’ and rollin.

Five hours later we were on final approach into Bunbury Harbour. This is a commercial port and thus well lit and straightforward though I confess to some nerves as we chugged along in this most foreign and unfamiliar environment. Finally, at 0130 hours Saturday we dropped the anchor and after checking its holding in the muddy bottom, retired to our bunks to sleep long and sound.