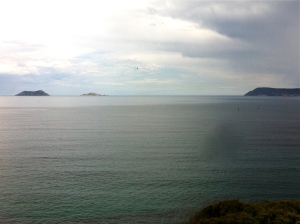 …on a much calmer day than when I came in!

The fine tradesmen and women of Albany have today done us proud in resurrecting Freespirit’s windlass motor. Apparently the contacts were very corroded to the point he spent hours getting them out and replacing them with new ones. Installed it this afternoon and is working like a charm.

One down, one to go. Not so much joy with the diesel motor unfortunately. A local mechanic and yacht club member came over last Sunday to where I was moored and diagnosed a faulty injector pump. Sure enough, an hour later when we had it apart and there was obvious problems with it. Monday I took it into a specialist and as I write this it is still with him. Apparently the parts needed to come from the Eastern states so this has added a couple of days to the process.

As you are probably aware my poor motor also copped a gut full of salt water the first night I was tied up to this jetty. I managed to get at least one change of oil through it before it stopped altogether (with the injector pump failure). My worry is that (one change of oil) may not be enough to get rid of most of the water and by the time I get the injector pump back on and everything put back in its rightful place… I may have a motor full of rust. Please, oh please let that not be so.

Been filling in my time doing lots of little jobs I’d not done before I set off or that flagged themselves during the voyage. Its a good way to fill in the time and gives some satisfaction too.

Playing the tourist the other day I took a new look at the 3 main bays that comprise Albany waters. The first pic (up top) is the main entrance into the outer harbour, albeit on a much calmer day than that of my arrival. The main freight terminal and yacht club areas are in a second bay through a channel to the bottom right.

The second pic is that of Emu point. This narrow channel leads into a third bay that has facilities for yachts and fishing boats to be hauled out of the water for anti fouling and maintenance. On the other side of the entrance is a nice secluded anchorage that is well protected from the elements and has some permanent moorings for pleasure craft to hook up to. Funnily enough, this place is called Johnsons Bay! I intend to take my boat in there over Christmas sometime for a day or two as it will be a lot quieter than the marina during this busy period.

Meantime I booked a pen here at the Yacht Club Marina for two months. That will take me through to early Feb when I’ll start making my way down to Esperence. More on that later.

Till next time.
Caio