After many weeks preparation and refurbishment I met my new crew for this leg of the journey at the Albany airport on the 27th December 2012.

I had a fair idea what she looked like from the findacrew.com website but she apparently had none of me. Standing at just over 5ft tall and probably no more than 45kg soaking wet Wendy and I made a strange pair as we picked up her bags and headed for the car park.
The airport is quite a long way out of town and as regular readers of this blog would know I was blessed with the loan of a car from a fellow yachty called George. A top bloke and a real life saver as the Sailing Club is a fair hike from town. 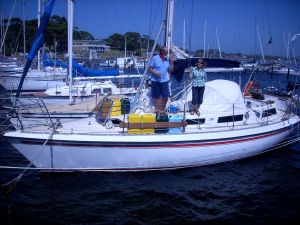 We got Wendy settled in and made plans to go shopping for last minute extra’s the following morning. The next day following this I took Wendy sight seeing around Albany so she could see something of this pretty place before we left.
John K offered to take some photo’s of our departure and for this I was grateful as getting these shots are very hard, yet essential to a departure tale in the telling.

g and started snapping away on his favourite Nikon camera as we made departure preparations. Then, as we slipped our lines I discovered he had repositioned himself on his own yacht just outside the harbour, a perfect position to capture our exit. As you will see from the attached photo’s his work is perfect and tells the story all by itself, the gift of a good photographer with a well composed shot.

Immediately on leaving the jetty Wendy showed herself a capa

ble sea person by making adjustments to the leach line on the genoa whilst underway, one of the small tasks so important to a well drawing sail. Throughout the journey she was to prove herself an experienced and very competent sailor, a fact I was to be very grateful for on many an occasion.
We motor sailed out of Princess Royal harbour into King George sound, bound for the open sea.

Finally clearing the Southern exit we were met with messy confused seas pushed up by the freshening South Easterly. My plan was to steer a Southerly course whilst gaining as much Easting as I could so as to bypass the large High pressure system then in effect. These conditions are common to Summer in this area and they make East bound coastal sailing nearly impossible. We were however intending to go around the system by steering South as far as the ‘Roaring Forties’ if necessary to find Westerly winds.
This plan by and large worked very well though the cross chop and short, confused seas we encountered in the first two days was very severe and caused both of us much discomfort in the stomach department. Wendy to her credit looked just as bad as me though she managed to hold onto breakfast whereas I did not. The following day conditions eased somewhat and we began to improve to the eating regularly level once more.

By day three we had reached the limit of Easterlies and found calm weather and our progress slowed considerably.
Used my new Satphone to pull in weather information and overlay my chartplotter info to determine weather pattern locations and directions. This was to prove a real bonus later on in predicting when the wind would swing to the North and rapidly increase in strength.