After that rather anxious night at Whalers I set sail in the stiff S Westerly for Kangaroo Island.

The plan here was to get as far as I could along KI before stopping the night. My ideal was Emu Bay or Bay of Shoals just around the headland from Emu and 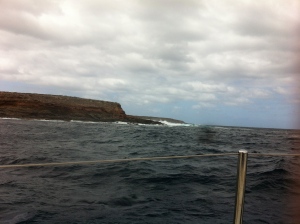 Western side of Wedge Is.

close to the town of Kingscote.
The further I ventured out from behind Thistle Island the rougher the swell and chop became. I’d reefed down to #4 headsail and double reefed main so we were powered correctly, just the sea state was uncomfortable and being tossed around so much made it difficult to hold course.
Wedge Island was the closest I could point into the wind and the closer I got to it the rougher the sea became. Made an executive decision to pull in behind Wedge for some shelter and if it was ok, possibly overnight. 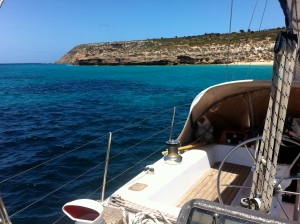 Looking out the other side.

The difference between the Western side and the Eastern side of this isolated lump of rock couldn’t have been more different. Chalk and Cheese.
A crescent shaped sandy bay with intricate rock formations at the Southern end quickly made up my mind as to whether to keep going or not. This was truly beautiful and peaceful. Purest of pure turquoise water, pods of dolphins playing near the shore and solidly anchored in 3 metres onto a sand bottom. Heaven.
Checked the weather via Satellite Phone and there was to be no change in the gusty, choppy conditions until tomorrow so I’ll happily stay at Wedge tonight.
Feeling safe and secure I took a nap to catch up on some missed sleep the night before and awoke an hour later feeling fresh and invigorated.

Freespirit was swinging a little on her anchor as the tide and wind tugged her this way and that so I decided (as you do) to experiment and try to make a ‘Riding Sail’. This small scrap of sail mounted aft is designed to keep your craft steadily pointing into the wind by pushing the stern back in line when the hull tries to sail up on the anchor.
After much thought I struck the idea of using a dividing curtain I found on the boat when I bought her. I only use it to screen off the forward cabin when I have crew so at the minute it was unemployed. Ahah! A bit of rope, some zip ties and hoist away on the main halyard…. there ya go!! Seemed to work just fine so I’ll make a proper one when I stop into my next major port.