Having finally gotten some weather that was favourable to us, we set sail from King Island for Tasmania on the 18th of February 2013. 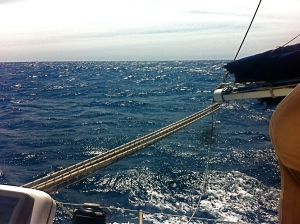 A firm swell greeted us as Freespirit swept out to sea under sail and power. The gentle ENE winds giving us a reasonable opportunity to lay Three Hummock Island with our port tack. What we didn’t figure into the equation was the strong Easterly flowing tide pushing us off our rhumb line by a good 8 Nm, right into the path of Albatross Island. This particularly nasty looking rocky outcrop was avoided by motoring back to our rhumb line, safely passing Three Hummock Island finally at midnight.

Stitching in time on the high seas!

Typically of sailing, after rounding the Island the wind died down for about 3 hours before coming back from the South West. This was the wind I was gambling on to take us right to the Tamar River and Launceston and it pretty much arrived on time.

At one point I moved forward to release a snagged line and the boat suddenly lurched beneath me. As I was wearing my harness and tether lines I was safe from going overboard however I landed on the forward edge of my dodger, splitting it at the uppermost seam. With lots of green stuff coming over the bow and spray everywhere this damage could not wait until we were in a safe harbour so, as the swells got rougher and the wind got stronger, the crew of Freespirit did some old fashioned running repairs with needle and thread. With Sarah in the inside and me barely clinging to the outside of the damaged dodger we managed to sew in a temporary fix that has held quite well.

Long term readers might recall a similar thing happening to the other side of the dodger whilst out in the middle of the Southern Ocean. That time my crew and I effected a similar repair to this and under similar conditions. Sadly this winter the dodger must go and be replaced with something much more comfortable and smarter looking than the present one.

Sunset off the Tamar

From that point on we sailed well with the steady, sometimes strong South Westerlies until about 38 Nm out from the mouth of the Tamar. I got a weak phone reception so sent off some texts to announce our immanent arrival.

No sooner had my last text left the phone than the wind suddenly and violently changed to the South East. Now this is exactly what I didn’t want to happen right then. I knew it was coming sometime in the evening and was hoping to be a lot closer to our destination when that happened, however, the plans of mice and men all suffer the same fate and once more we switched to motor power with only the double reefed mainsail up. Good thing too as we now were headed into a fairly short steep swell with winds gusting up to 30kts at times. Very uncomfortable and hard work for our faithful motor which never missed a beat the whole way.

As dawn broke across the Eastern sky we were negotiating our way through the entrance to the Tamar River.

The tide was still running in though not for much longer. The cold SE winds were blowing directly into our faces and still we were experiencing a nasty chop.
Although we originally planned to travel up to Beauty Point that morning, the deteriorating conditions had us looking at plan B, a short stay on a small public jetty at a now disused Pilot station just inside the entrance to the Tamar River.

After some small drama’s negotiating the  shallow entrance, the tiny area and the strong cross winds we finally berthed alongside and snugged Freespirit down. Both of us were dog tired so after a big breakfast we caught up on some lost sleep. Awaking some 5 hours later feeling a little more human we refilled the main fuel tank from the jerry cans and tidied up ready for our run up river.

At around 2 pm I made a phone call to the marina at Beauty Point requesting a berth and was told no, sorry no room as the Tasmania circumnavigation cruise was due to arrive… bugger! The fellow did say he will try to squeeze us in but we may have to shuffle around a bit. Ah well, something is still better than nothing, so off we went upriver admiring the glorious scenery of the Tamar valley.

Checking out the scenery.

8 Nm later we arrived and after calling him again, Ron the caretaker for the Tamar Yacht Club marina came out in his tinny.  We followed him into the maze of masts and pylons of the marina, finally arriving at a close-in berth, perfect to avoid the South Easterlies that can spoil the party here when blowing hard across the bay.

This was the end of the road for my crew Sarah who got off to continue her University studies. Over our time together we grew into a good little team, sailing Freespirit and keeping each other company. Thanks Sarah you will be missed. 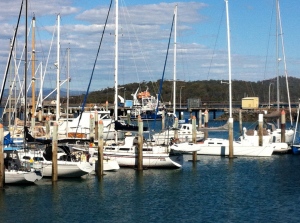 Snug berth at the TYC marina.

A great sleep last night and a drive to Launceston today in a borrowed car was a great opportunity to see what a beautiful place the Tamar Valley was, and to find a new internet provider.

Unfortunately Vodaphone means nophone down here as Telstra has all of the coverage and about 90% of the market in phone and data. Ah well, when in Rome and all that. So now I’m hooked up to Telstra, the company we all love to hate, once more. Having no good Internet service since South Australia certainly brought it home to me how much in this day and age we ‘all are/can be’ dependent on this technology for our communication needs.
I’m baaaack!!!
Cheers

6 Responses to Taming the Tamar