Time to stock up again.

With no stores or modern conveniences in the Tasmanian wilderness Freespirit’s stores had once more run low and needed replenishing…. ie I was out of beer!
First though it was time to climb Bear Hill and take some photo’s from its magnificent summit. Its a long way up and down and more exercise than I was used to but I made it up and back in one piece. Some of the places in the track were not for the faint hearted though.
Today was also a time to check all gear and prepare for the next phase of the journey. Having finally reached the start of the great cruising Tassy has to offer all that is left now is to enjoy it! Sounds like a plan. You bet! 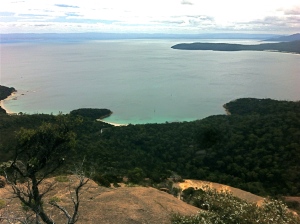 From the top of Bear Hill. Freespirit near centre of pic.

Next day I left Schouten Island early and headed over to the only town in this vicinity called Traibunna. Apart from being a mouthful to say, it is also a tiny fishing village and not that easy for visiting yachtsmen to get into or out of.
A very tight entrance to the dock made things a little difficult but eventually I managed to pull alongside the allocated berth… a prawn trawler I rafted up to. Tiny Triabunna is a funny little place. Finding food and booze was easy, however I had to give up finding fuel as the only service station in the place was closed because it was a Saturday (after 12). Just have to be careful of my use of the motor from now on until I can get to Hobart and top up. 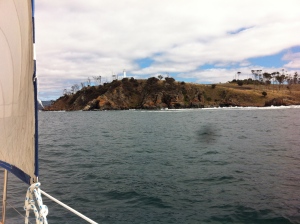 By the time I got back to the docks the tide had reached its peak and was turning so its “throw the lines off and make tracks” over to Chinaman’s Bay for the night.
Left the channel leads and low and behold I’ve got wind! No, no the type you get when eating too many beans… the sailboat kind of wind!! And what a glorious change it was. Seems like all I’ve done since arriving in Tasmania is use my motor to get anywhere. So nice to finally leave the noisy thing off and listen instead to the steady trickle of water past the hull as the sails pull us through the water. This is what its all about!

Reached Chinaman’s Bay in the early afternoon and found an anchorage in some reasonable depth of water. No duck weed here (yet). I’m beginning to see now why its such a problem here though. I had it all over my anchor chain when I pulled it up at Crocketts Bay in Schouten Island. Its a very fine bright green stranded weed that is very difficult to remove from your equipment once it attaches itself to it. A real curse and its spreading itself everywhere throughout Tasmanian waterways.
Close Encounters and Moonshine showed up later that afternoon and rafted up together close by.

Awoke early this morning to a beautiful bay and a gorgeous sky. Checked my weather info and it all looks good for a trip down to Fortesque Bay. 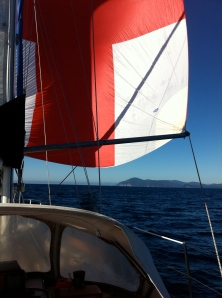 This bay has come highly recommended and so I’m looking forward to checking it out for myself. Once I’d cleared Chinaman’s Bay the wind freshened a little from the North West so I dug out my spinnaker and after a bit of ginning around I set it. What a glorious sight. This is the first time I’ve actually used the spinnaker since buying Freespirit back in July 2012.

Didn’t take long until it was pulling us along at a respectable speed given the gentle winds. Took lots of photo’s (as you do) of the sail flying as we sailed past some spectacular coastline on our way to Fortesque Bay.
By 1500 I was almost level with the entrance and although I would have loved to sailed the whole way a South Easterly change came in around midday to change my plans.

Nothing I can do about that except put on the motor once more and chug along with just the mainsail up.  Made good time as the wind wasn’t quite on the nose… about 30 deg off so it meant I could make use of at least the main to gain some extra speed.
Finally dropped anchor and turned the motor off at 1600 hrs. The peace was deafening!! The beauty of nature in all its 360deg magnificence was mine to enjoy with relish. What an absolutely gorgeous place this is. Totally lived up to its recommendation and then some.

Launched the dinghy and took a row around to check it all out. There appears to be a freshwater stream feeding this small bay but its choked with logs and difficult to get to so I’ll give it a miss.

Have decided to stay for another day in this place, easiest decision I’ve ever made! Don’t think I’ll go to depressing Port Arthur either. So much human misery went on there I think I’ll just stay happy and chearful. If I change my mind I’ll go visit it by bike later on as it might be a good ride over there. 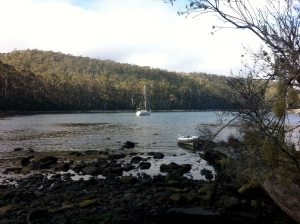 View from the shoreline. Had the bay to myself all day.

Spent the day being idle, lazing in the sun, reading and eating.

Took a row ashore and walked up some of the tracks that have been made around the bay… ok, that’s it for excersize.. back to sloth!!

Plans are to head to Hobart tomorrow morning though the wind situation is pretty slack.

2 Responses to Ramblin’ on….