Its looking more like summer every day, even had my first annoying mosquito come and visit last night, a sure sign of warm weather to come if ever there was one.

Winters are long in Tasmania, at least by Australian standards and this one has been no exception. Freespirit and I have done ok; staying warm and getting things done toward a summer departure for NZ, but with the weather now in change there is a new urgency to be ready in time.

Its an oft repeated saying among sailing folk that a boat is never finished and I certainly subscribe to that. My hope then is to at least get it the very best I can given the time I have left to do it. 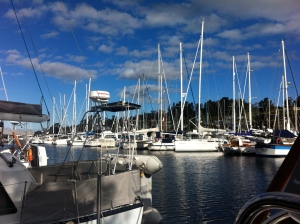 Marina view from the cockpit.

This time the major task was to paint the decks with non-skid paint. The kind that has lots of little particles in it to help your feet get some grip on a sometimes heaving deck. I pondered and procrastinated for the longest time as to what colour to use, finally deciding on one the manufacturer called ‘Seashell’. Looks kind of greeny-grey in the can but seems to work well with the white hull and maroon detailing.

Preparation for this was a case of on the knees and scrub, sand and mask off. A loan of a friends power washer was a real help as it helped to lift 30 years of deeply ingrained grime and god-knows-what out of the small indentations in the original moulded non skid surface. Applying the paint is kind of tricky as it contains lots of small particles that like to sink to the bottom of the can quite quickly as you use it. Therefore every so often you need to stop and give it a good stirring up to get them bourne again. To not do so would result in large and very noticeable bare patches, the right colour but distinctly lacking in the grippy stuff.

Before I started on the painting I had to seal the foredeck hatch.

It leaked some on the trip over here, particularly when we took seas over the bow and there was lots of water running around it. There had been a wooden plinth installed beneath the hatch itself that appeared to be the culprit, so off it came… only to reveal a honeycombe of holes previously drilled into the decking surface. Groan…

Also the square hole cut in the deck didn’t match the rounded corners of the hatch and they were dangerously close to each other. Just begging to leak again with the slightest movement of the bonding agent in those areas.

Ok, nothing is easy on a boat so I built up the corners and filled all the holes left by previous installations. Later sanding and fitting the hatch to sit as flush as possible into the aperture. With the hatch finally bedded down the painting work began in earnest.

The new dashboard now has its final coat of maroon on it and will feature in the next post.

4 Responses to Hit The Deck