The New Year has come out of the blocks at full noise. From singing sea shanties at the Cygnet Folk Festival, riding up to the top of Mount Wellington and Freespirit now sports a new nose cone!

A must-do when in Hobart is visit Mt Wellington, a journey by road of some 22 km up 1,271 metres (4,170 ft) to the top is rewarded with glorious views. The mountain can be seen from almost anywhere in Hobart and is a huge tourist destination in the summer months. There was a  slight haze in the air the day we travelled up there and the temperatures dropped dramatically once we had gained the summit but was still well worth the ride. It can snow up there even in the summer months!

The next weekend we visited the Cygnet Folk Festival. This is somewhat a big deal down here and performers come from all over the globe to attend and play. The whole town gets into the swing of things and everywhere you turn there is music playing and street theatre performers.

Sidewalks, parks, pubs and cafe’s all resound to music of all descriptions and categories. The major venues are the the ticketed destinations however there is so much free entertainment in the street that there is no pressure to pony up the bucks for the headline acts if all you want to do is soak up some great atmosphere and mix with the happy people there in town. At the end of a fabulous day filled with great music and fun we rode back to Oyster Cove with a great feeling of satisfaction and enjoyment.

Freespirit now sports a new nose cone! A month or so before Christmas I engaged Dan the Stainless Steel Man to make me a new Forestay anchor/bow roller fitting and yesterday it finally arrived. 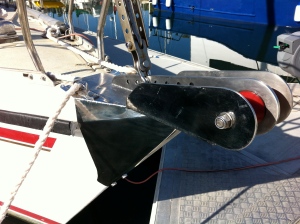 The old one was pretty sad with broken welds, a single roller and poorly designed, strength-wise. All that has now changed and Freespirit has a new ice breaker nose cone that is built strong enough to withstand a direct nuclear blast… ok, maybe not that, but it is exceptionally strong and Dan did a terrific job in welding her up and giving a mirror finish to the whole thing. Feeling is that I dodged a bullet there.

Selfie up the mast.

This new fitting will really give me much more confidence in the whole rig when it cuts up rough again. A major feature of the new unit is the double roller rig. This arrangement gives you choices, strength and anchoring flexability. The largest of the two rollers is for a heavy chain to travel over whilst the narrower one is for rope.

This allows a mooring rope to be picked up and led over the small roller without removing theanchor (as you would normally have to do). It also allows for more than one anchor to be set from the bow should it be needed. Part of the specifications I made in its design was to have the roller mechanism project much further out from the bow than the old one, allowing the anchor to come up cleanly without swinging and bashing the topsides as it is raised the final few feet from the water.

A problem that has scarred poor Freespirit throughout its past lives.

Next year when I haul out again I’ll give her a completely new topside refinish and paint that will remove the old scarring to look shiny and new again!

Time to get sailing.

2 Responses to Nose For Quality