Cygnet Regatta Weekend, its a big event in the Tassy sailing calendar. Its a time to get together have some fun and admire the beautifully restored wooden boats that gather at this time. Its also a long weekend!

Thus inspired, Dini and I headed off down Channel toward the action on a beautiful Tassy day.

Wind from the South East at 10-15 knots, Freespirit wearing her new sun protector maroon strip and a whole weekend in front of us.

No matter, the afternoon was gorgeous as we sailed along, perfectly balanced in the smooth water and steady breeze. Life is good.

By the time we rounded Huon Island and began to head toward Cygnet the breeze had died and we only had a couple of hours daylight so an executive decision to overnight at Randalls Bay was made.

Motoring into the bay we could see a number of other yachts had the same idea and so chose an anchorage further along the bay than was ideal.

Randalls is open to the South East down our end (Eastern) and the steady breeze throughout the day had built a small, but annoying swell.

After a great sail that day and an excellent meal,  being gently rocked to sleep by the swell didn’t bother us too much. 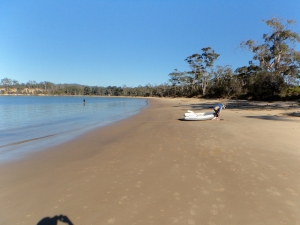 Next day we went ashore and took some exercise…. well Dini did. My ankle wound is still quite sore and if I give it too much use it lets me know.

Later, after all the other yachts and motorboats had left Randalls I moved Freespirit over to the best position in the bay, the public mooring on the Western End.

This proved to be great as it got no swell at all, and though close to the headland it proved a good solid anchorage.

Some weeks previous I’d bought a fishing rod and reel and now was the time to baptise it. Success! Between us we caught a lovely feed of fish, nicest among them were 4 Silver Bream.

Cooked up on my new Birthday BBQ they made a delicious dinner washed down with a chilled bottle of white wine. The BBQ was Dini’s birthday present to me and is a magnificent all Stainless Steel gas fired unit. 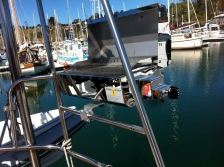 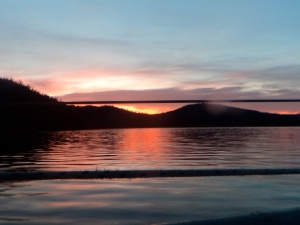 Next day as the morning light flooded in through Freespirit’s windows we fixed ourselves a fine breakfast and prepared for a leisurely sail back to Kettering.

The wind was light and flukey however the parade of wooden boats we joined on the way back was magnificent! 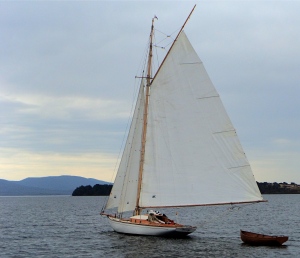 Square riggers, Yawls and many many Gaff rigged craft were here just sailing along together.

It was a magnificent sight. Some of the yachts looked in such pristine condition you would swear they had escaped from a museum, so perfect and well finished were they.

This part of the world at one time had a thriving wooden boat industry.

Utilising the very fine woods (Huon Pine, King Billy Pine etc) that are plentiful here, some of the finest craft to ever grace the water were built right here. I’m sure we were seeing some of the very best that morning.

The wooden boat enthusiasts have made such beautiful work in restoring them. Not just to look at but to sail.

After a lovely sail back, interrupted only by an impromptu lunch as we drifted along the channel we arrived back in the Marina, tired, happy and refreshed after a wonderful weekend…….Tassy style.

This entry was posted in Uncategorized and tagged FreeSpirit, Randalls Bay. Bookmark the permalink.