One More for the Road

Since last post a lot has happened so I’ll try not to make this one a cure for insomnia… or make it too brief by omitting important stuff.

The one thing better than a sailing lifestyle is someone to share it with and this happened shortly after returning from an aborted attempt to leave the apple isle last May.
With a tag-a-long crew we set sail up the coast, endured some pretty adverse weather and effectively got stopped in our tracks at Wineglass Bay. For a week and a half we hung out there whilst the storm fronts kept coming through Bass Strait.
After much consultation and discussion with my partner  Dini I returned to Hobart. We found a placement with our crew that saw them successfully complete their journey to Sydney on the cat Songlines. She was anchored behind us in Wineglass Bay and we befriended the skipper during our time there.

Upon making port I set about converting Freespirit into a much more comfortable home for two people as from now on our plan was to sail together and enjoy the lifestyle for a time.
There were first world problems to overcome before Dini could move on board what with leases and work arrangements. Whilst all this was in play I was visiting the marina daily to tear down the aft cabin and build a much more comfortable configuration… an island bed.
Now as anyone who has been around boats will tell you, if the boat wasn’t designed to have an island bed, its neigh on impossible to build one in there. I love a challenge.

The existing sleeping arrangements was a double that followed the hull shape and though not terribly uncomfortable, it left the person on the inside claustrophobic and needing to climb over their significant other to reach ‘facilities’. This was unacceptable and inconvenient to say the least, so the design had to allow for access to both sides through to the rest of the boat.

Everything was tight and complicated but I could see there was a way it could work if I raised and curved the sides to allow freedom of movement and access from either side.

This and making a bloody great hole in the engine room bulkhead could seal the deal. Major problem there was the rather important steering wires were in the road, along with some electrics and plumbing.
So, before I could start making the bed I had to re-route the steering mechanism so that it ran a more direct course, right underneath where the bed is to be located. Won’t bore you with all the details but it took some figuring to make it work. 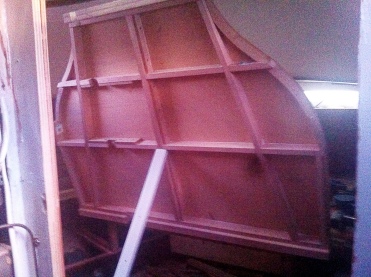 Next I discovered that the bilge pump and its hoses were unserviceable and had to be replaced…. and whilst fully engaged in this activity I also discovered a badly deteriorated exhaust hose. As there wasn’t already a method for closing the exhaust through hull fitting off from the ocean, I purchased and installed one of these at the same time. The water trap had been leaking since purchase so this was an ideal time to replace it also…. still hadn’t started on the bed yet!

The remake was fairly drastic but with two full time live-aboards soon to be in residence, I had to build in lots of cupboards and lockers where space allowed.
Finally the bed itself. Recycling some very fine Red Cedar timber that was used in the original fit out, I manufactured the curve I needed in the top half of the bed. This I capped in Huon Pine to include some iconic Tasmanian timber in the construction. 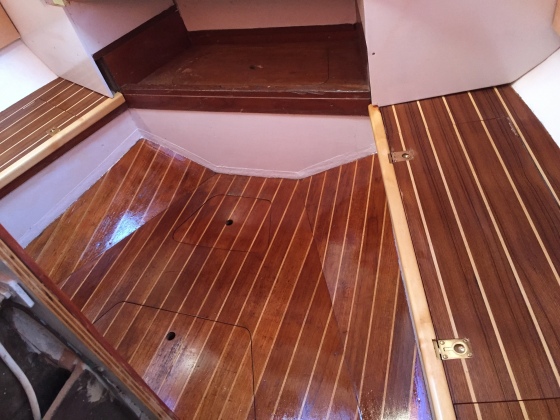 We still needed to access areas beneath the bed so I put the upper half on some sturdy hinges and built the scantlings out of Tasmanian Oak topped with 12mm Marine Ply. The result was a very strong yet light weight base that could be quite easily raised when required to access storage below.
Winter raged outside as I beavered away with naught but an electric fan heater for company. Finally it was done and we moved aboard in November 2015. 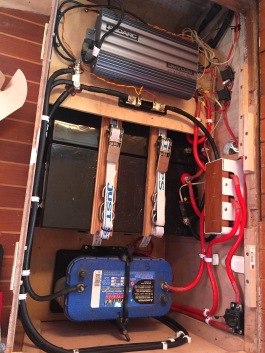 Many more renovations and customisations have taken place since then. We ditched the chart table in preference to putting our 60lt Engle Combo fridge/freezer at a convenient height and within easy access to the galley. New batteries, wiring and my favourite piece of kit, a Redarc Battery Management system have been installed.
We jumped up from a fairly tired 150 Amp house Gel battery system to a pair of Ritar 200 Amp Deep Cycle AGM’s. Most recently I have added a 200W solar panel to the pair of 50’s in the existing array to further boost our charging capability.
While I was in the  mood I also designed and built a mini-workshop in the remaining space previously known as the engine room. I can fit all my tools in there though there isn’t much room by the use of sliding shadow boards, see – through sorting containers and some heavy duty workshop drawers from Bunnings.

Most recently I put mysef through hell installing an Eberspacher D2 Airtronic diesel heater. Just in time too as the day after install we had a cold snap and it got a serious work out. I’d read reports of other cruisers adventures installing these in their boats and I discovered they were not joking about how long and complicated this process is. All that is forgotten though when you press the button, it springs into life and starts delivering warm air onto your cold nether regions.. ahhh

All Present and Correct

Its almost March 2016 and several departure date guesses we made have come and gone. It’s time now to draw the line in the sand and say that’s it! we are going…..Dini finishes work next week, I’ve still some tidy up jobs to do and then we are ready. Providing the weather is fortuitous for a Bass Strait crossing, we should be making landfall soon.

2 Responses to One More for the Road