After the wild weather of the East Coast Low had departed a booking at the Port Macquarie marina was made and we headed out the next day for a most pleasant day trip there.

After arriving and settling in we got about the business of working on our shopping list. As luck has it we met a delightful local couple on Sagitaire berthed next to us. Alan and Anne very generously loaned us their car as the nearest shopping precinct for the goods we sought was several kilometres away. The next day whilst I helped our neighbours fix a contaminated water tank, Dini went and completed a St Johns First Aid course…. a bucket list item that may prove very beneficial down the track.

A visit from Dini’s second cousin Simon Jones and a night on the town complete with dinner and some live music made for a terrific night.
The marina in Port Macquarie is very small and thus crowded having as its greatest assets a shopping village within easy walking distance and an easily accessed fuel dock. The marina also owns two swing moorings and it was to one of these we moved after a week tied alongside.

Shortly after we decided to motor up the Hastings river as far as we could go and do some exploring. A couple of days of peace and quiet in a beautiful rural setting was perfect for chilling out and throwing a line in.

The downside was the water was brownish, almost no bites on our lines and quite a lot of debris still moved up and down with the tide…. along with lots of leaves there included some fairly thick branches.
It was at this juncture we were paid a visit from good friends Larry and Norma Blackmore. Such a delight to share some time with these folks, fellow free spirits who were on their way to a well planned motorcycling holiday through the prettiest countries in Europe.
With the prospect of another low approaching the next day we prudently moved back downriver to the swing mooring that afternoon and during the night the winds and rain gave us little cause to worry as we happily swung with the tide.

The news next day was that we had to get off the mooring as 13 Riviera motor boats had booked space and were visiting then.
We moved down to a delightful little spot right next the CBD called the ‘duck pond’. It was very tight and room for just one boat but very well protected just the same.
Spent a couple of days there while we awaited a suitable weather window and then in the company of our new friends Anne and Alan from Sagitaire departed for Iluka.

4am saw us slip out of Port Macquarie and over the bar following Sagitaire to Coffs Harbour.
Nice to have the locals show us the way out and it felt good to be cruising in company with like minded souls.
Like the bar crossing, the sail up to Coffs was very pleasant and we made, up close and personal, our first whale sightings.

We had spotted some at a distance whilst transiting from Laurieton to Port Macquarie but never up this close. A very large specimen swam over until alongside of us and slowly rolled over enough to eyeball us. It was  a remarkable experience and of course none of us got a picture… we were too stunned by the proximity of our 20 tonne companion to even move!

Arrived in Coffs harbour at 6.30 pm and found plenty of space near Sagitaire. After a meal, topping up the fuel and settling in we slept soundly until 4am where we once again headed out to sea, this time our destination was Iluka. Our early start from Coffs ensured we were in plenty of time to cross the bar and safely anchor by mid afternoon. A very pleasant trip but an early night to sleep was on the cards by this time. Thus began the Iluka section of our journey.

For some time I had been looking forward to being in Iluka/Yamba as it is well regarded by other cruising sailors and offers a wonderful upriver experience visiting some unique towns as it wends its way to Grafton.
After plenty of R&R we were ready to make this trip and as luck would have it, our friends Anne and Alan also had time and inclination to do the same.
In what Dini was later to describe as a highlight of our Northern travels we motored upriver past cane fields and river mansions to arrive at the Harwood Bridge on the appointed time to await its opening and the short distance to our first stop at Maclean.

The river conditions weren’t ideal due to a cool South Westerly putting chop on the surface but with the many twists and turns in the river it was never long enough to be annoying.
The Scottish-themed Maclean was delightful and the people friendly. After scoping out the shops and gaily decorated tartan power poles we retired to a delicious meal at the local RSL before retiring for the night on our floating homes. The floating jetty was good with power (not working at that time) and water. There is a 24 hour limit to all stays but we found that to be adequate anyway.

Next morning we set off for Ulmarra, the most upriver town a masted vessel can reach but not pass under on the Clarence. 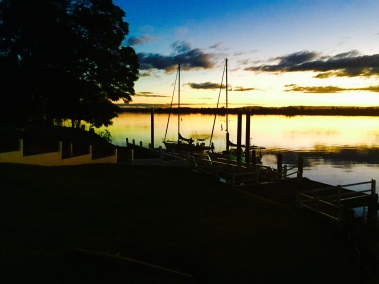 Along the way we saw the settlements of Lawrence and Brushgrove, later returning for a whistlestop tour of Brushgrove on our way back downriver. At Lawrence we passed over the shallowest part of the river where the depth sounder showed we had less than a metre under our keel.
This area is quite short; quickly over it we were once more powering along in 5+ metres. These upper reaches are quite broad and contain a wide variety of scenery, all picturesque and fresh to our eyes. 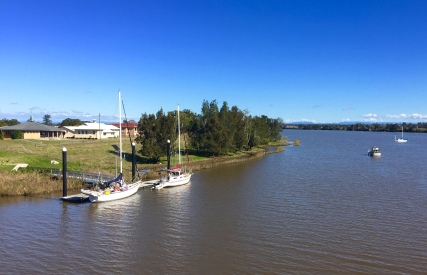 By early afternoon we were once more firmly tied up alongside the Ulmarra floating pontoon and ready for a celebratory drink.
This is an easy ask as the pub is right next door with the beer garden overlooking the dock… with the sun going down and a cool sherbet in hand it was a difficult task to think of what could be wrong with this scene.
In fact there was nothing… it was a cruising sailors heaven. A quiet, safe dock, good friends, good food and a short walk to the nicest country pub you could ask for… not to mention a great night of singing and playing music…. doesn’t get much better than that.
After two days of heaven at Ulmarra our two boats motored back downriver to Maclean to overnight and be at the Harwood Bridge at the appointed time the next day.

Arriving at the bridge an hour early as we needed to get off the dock sooner that we intended.
Another boat wanted to come alongside and dock so it made sense to make room and jig about whilst waiting for the bridge.
Once through we were greeted by the sight of an identical Jarkan 34 to Freespirit…. in fact, if you ignore the different dodgers we could be twins.
This was Hina, owned by Iluka locals Jason and Katrina and one of the last two Jarkan 34’s built at the Jervis Bay factory before a fire closed it down.
A total of 53 boats were built to this design, Freespirit being #16 and Hina #52.
I had been corresponding with Jason whilst in Tasmania where we discussed many aspects of design and layout so it was a thrill to later inspect Hina’s immaculate fit and finish when we returned to the anchorage. 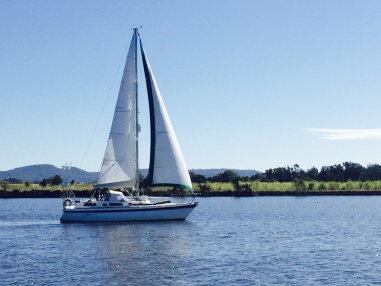 The rest of our stay in Iluka was pleasantly spent being tourists and taking in the many sights of this beautiful area before finally departing for the Gold Coast at one in the morning, Wednesday 13th.
This journey was once again enjoyable with many hours sailing in good conditions. Gentle seas and steady winds saw us just South of Cape Byron around 11am whereupon the winds picked up to 20+ knots and it was time to shorten sail. 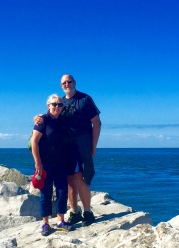 After a few hours it settled down again and the rest of the journey was without incident, aside from a brief excursion in shore to avoid some exuberant whales. Finally at 4pm after reaching Point Danger, the border of NSW and Queensland the high rise skyline of the Gold Coast was in sight.

As night fell and we motored towards the Seaway entrance, all the coasts lights came on and it was an eerie feeling. Unfortunately my iPhone couldn’t cope with the low light and distance so no pics 😦

By 8.30pm we were in the channel behind Wavebreak island with the anchor down and the now customary celebratory drink in hand. Another leg completed and lots of good stuff to come!
Ooroo

2 Responses to Crossing the Border